Getting Pulled Over with Weed in Texas

Advice from a Criminal Attorney If You are in Possession of Marijuana, THC, etc

The idea of legalizing marijuana is gaining traction nationwide, and with recent election results, even more states have effectively decriminalized the drug for recreational use.

Legal marijuana may not be far off in the future for Texas, as there are currently at least 13 marijuana-related bills slated to be introduced in the state legislature, including the sweeping reform of SB 140, which would legalize cannabis for all Texans older than 21.

In the meantime, however, marijuana is still very much illegal in Texas.

Possession of even the smallest amount of marijuana could end in a jail sentence and $2,000 fine. A single edible brownie laced with THC becomes a felony in Texas.

Marijuana and Interstate Travel in the Texas Panhandle

Since 2014, the Texas Panhandle has been in the crossfire of “cannabis tourism,” which started when Colorado legalized the drug for recreational use, creating a billion-dollar industry.

Many Texans driving back home with their legal purchases from Colorado do not realize the risk they take passing through cities such as Dalhart, Amarillo and Lubbock, where traffic stops can often end in a marijuana bust.

Cases such as these appear to be lessening in number throughout 2020, thanks to a Texas law in 2019 that legalized hemp. This action led to hundreds of low-level cases being dismissed because it is often impossible to tell the difference between marijuana and hemp without a lab test.

Earlier in 2020, a federal court in Amarillo dismissed a case against a U-Haul driver who was charged with trafficking 3,350 pounds of marijuana in boxes after it was discovered that the “marijuana” was, in fact, hemp.

Avoiding mix-ups like this could be why there has been a recent statewide drop in marijuana possession arrests, which fell 30% from 2018 to 2019, according to the Texas DPS. Marijuana manufacturing arrests have also dropped, going from 2,700 in 2018 to 1,900 in 2019.

Type and Quantity of Drugs Seized by County in 2020 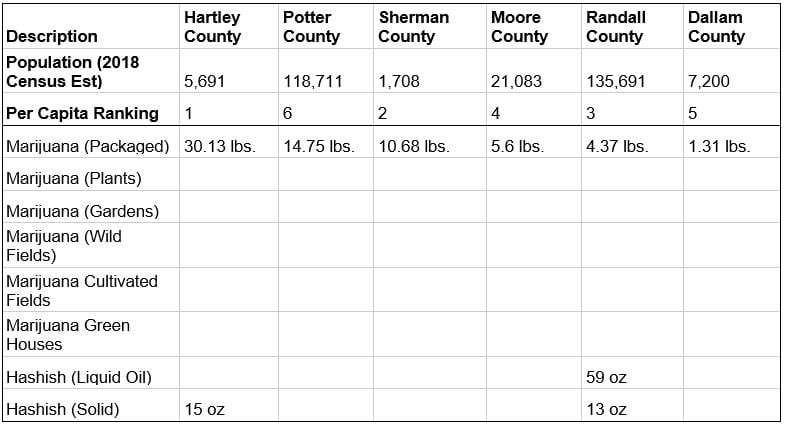 The Texas Department of Public Safety’s Unified Crime Reports capture total amounts of drugs seized by city and county police departments. The counties above represent most of the Texas panhandle. Not listed are Hale county with 0 ounces seized and Lubbock County with 9 ounces.

Viewing the population and comparing how many pounds of marijuana were seized in 2020, shows several outliers. Hartley County which includes the small towns of Hartley and Channing is leading in total pounds of marijuana seized. Interestingly, Dallam County is the first county many drivers traveling from Colorado to Texas will encounter. While Hartley is the second if continuing to Amarillo, Lubbock, Dallas or Austin. This would indicate a higher risk of traffic stops in Hartley County vs Dallam County.

Another outlier is Sherman County, which has the smallest population in the panhandle, but is ranked 3rd in total pounds seized. Most drivers traveling from Denver to major cities in Texas do not drive through Sherman County as it is further northwest than faster routes.

Type and Quantity of Drugs Seized by City in 2020

Next, we analyze type of marijuana seized in the Texas panhandle by city. While Amarillo had the highest amount of marijuana seized by the city police department in 2020, Lubbock had a higher amount of solid Hashish. Hashish is better known as THC concentrate and is a felony in Texas. Edibles are also more likely to contain THC vs cannabis leaves.

In 2020, the client was driving through a rural South Plains county, moving from Colorado to his parent’s home in South Texas. A DPS trooper noticed his vehicle had Colorado plates, so he followed the vehicle for some time. The trooper stopped the vehicle because he said he noticed the vehicle’s right wheels crossed the solid white “fog line” on the right side of the roadway, a traffic violation. The trooper searched the vehicle and found marijuana and THC.

Read How the Case was Dismissed

What to Do If You’re Pulled Over

Fewer arrests might seem like good news, but there are still plenty of marijuana arrests being made in the Panhandle — and most are happening during routine traffic stops.

In August, Plainview police arrested a 24-year-old man after finding marijuana and other controlled substances during a routine traffic stop. These kinds of arrests happen often.

Here’s what you should know if you’re in this situation.

Do not provide probable cause

Leaving out lighters, bongs, or playing loud music could indicate to the police that you have been partying and could be in possession of drugs.

If the officer smells marijuana, he could determine that it is probable cause for a search.

In October, a Hartley County deputy stopped a vehicle for speeding. After smelling marijuana, the deputy searched the vehicle and found 4 pounds of cannabis, in addition to THC products, a large sum of cash and a loaded AR-15. The deputy made two arrests.

Most marijuana arrests include other drugs, money, weapons or paraphernalia. Paraphernalia can include items such as bongs, vaporizers and potted plants.

Last year, Dumas Independent School District Police Department reported that vaping had been growing out of control among students, including 26 cases for possession of vaporizers. While these cases all involve tobacco (which is still prohibited under the age of 21), using vapes with THC products can change this offense into a felony.

Remember, if you give any indication — via paraphernalia, odors or behavior — that you are under the influence, this is probable cause for an officer to arrest you for DWI and seek a search warrant for your vehicle.

Be careful what you say

The easiest way to get arrested for possession of marijuana is to tell the police you have marijuana. When in doubt, say nothing.

Be calm and polite

Avoid acting nervous. Comply with the officer’s request for license and registration. If the officer asks to search your vehicle, respond calmly. Say, “I do not consent to a search without a warrant.”

If the officer says they will call a K-9 to sniff for drugs, tell them this is fine. K-9 dogs may not be able to tell the difference between hemp and marijuana and should not be the sole source of probable cause.

If you do all of the above and are arrested under marijuana charges, call a lawyer from Chappell, Lanehart & Stangl immediately.

Marijuana convictions — even for the smallest amount — can have wide-ranging consequences on your life. You may lose your driver’s license and employment opportunities, so it is important to find a qualified marijuana lawyer from Chappell, Lanehart & Stangl.

Our lawyers can help overturn charges, get you a reduced sentence or find diversionary programs that will help you put this chapter behind you.

If you feel your rights were violated during your traffic stop or arrest, let our lawyers know immediately. There have been cases before, including a race-related incident 20 years ago in Tulia, that have impeded on civil rights.

At Chappell, Lanehart & Stangl, we are committed to successfully investigating and defending drug cases. If the prosecutor knows your lawyer will fight for you, your outcome is much more likely to be favorable.