Trial Verdicts and Results in the News

For several decades, Chappell, Lanehart & Stangl P.C. have earned media attention for a variety of cases. Below are a selection of published verdicts, interviews and results earned by Chuck Lanehart and Fred Stangl. 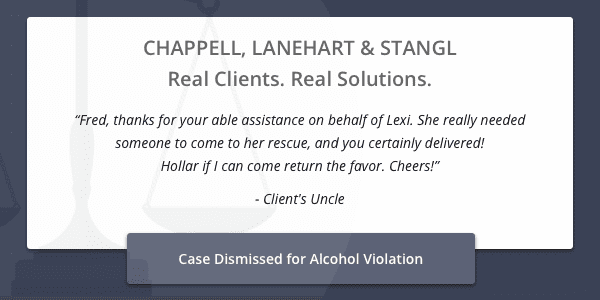 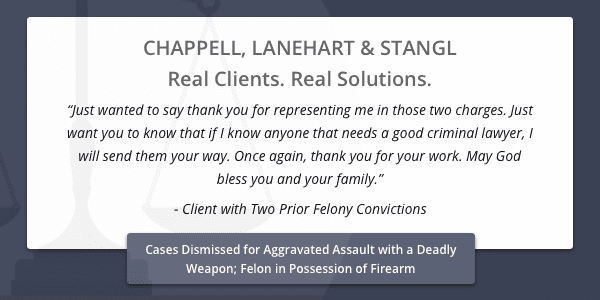 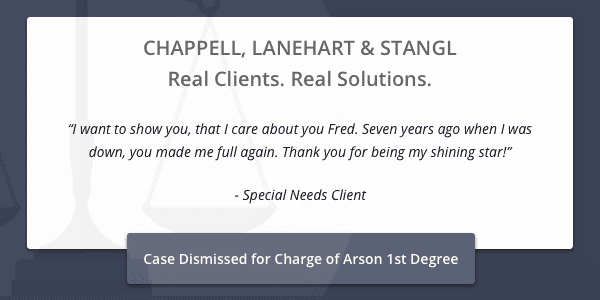 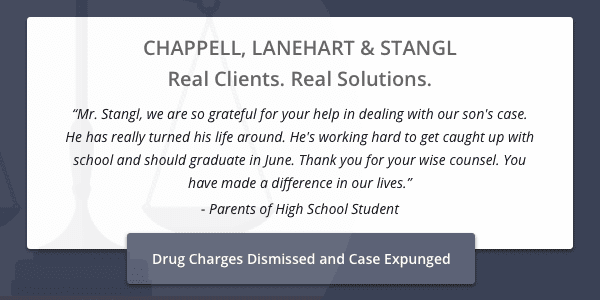 In 2021, Chuck Lanehart successfully defended his client, accused of prostitution. All charges have been dropped by the prosecutor and she will be eligible to have her arrest expunged. Below is the client’s thank you note:

Thank you so much for your professional and expeditious handling of my case. Everyone on your staff was courteous and patient in explaining the American judicial system with which I am not familiar. I am very fortunate to have someone as experienced and knowledgeable as you helping me.

I am very appreciative of your help in getting my bail money returned and disposing my case quickly and completely. I recommend your law firm to anyone who needs legal representation.

Chuck Lanehart’s client, a female teacher at Muleshoe High School was indicted for improper relations with a student in 2013. Ultimately, the defendant received a deferred sentence of probation in exchange for resignation. She was released on a bond of $5,000 and avoided conviction, sex offender registration and potentially, twenty years in state prison.

Fred Stangl successfully defended a client that was previously convicted of a felony. Ryan Garcia avoided life in prison for shooting and killing Paul Ochoa. Ochoa was attempting a robbery on Garcia’s home. In addition to the murder charge, Stangl was able to get possession of a controlled substance dismissed. After the shooting, police discovered methamphetamine in Garcia’s residence. Instead, Garcia was able to enter into a favorable plea deal for unlawful possession of a firearm by a felon.

Chuck Lanehart successfully appealed a search warrant for a client accused of running a meth lab in his machine-shop business. The Texas 7th Court of Appeals in Amarillo reversed a conviction on drug charges in 2002, resulting in a new trial. The case was ultimately dismissed.

A felony drug charge following a plane crash is rare. So is receiving the minimum sentence when caught with 160 pounds of marijuana. In 2013, a plane traveling from California to Houston stopped for a refuel in Plains, when it made an emergency landing. Chuck Lanehart’s client, the pilot of the plane received 24 months in prison for a conviction that could have earned 20 years in federal prison.

A former director of Lubbock’s animal services received 18 months of probation, after pleading guilty to two class A misdemeanor driving while intoxicated charges in 2012 and 2013. Fred Stangl represented the former director, and secured a dismissal of felony theft charges of up to $20,000 as part of a DWI plea deal.

“This has been a tough and trying time for Kevin and his family,” Stangl said. “But he’s persevered. We’re very happy that the felony charges against him have been dismissed. He’s accepted responsibility.”

Fred Stangl’s client was charged with aggravated assault in 2011, after allegedly firing an assault rifle at a residence on 38th street in Lubbock. The defendant was declared a fugitive and was listed on the Texas Most Wanted until 2014. Once in court, a mistrial was declared before a verdict could be made due to a conflict of interest and witness testimony. 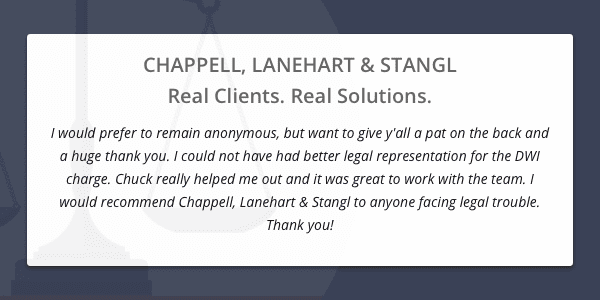 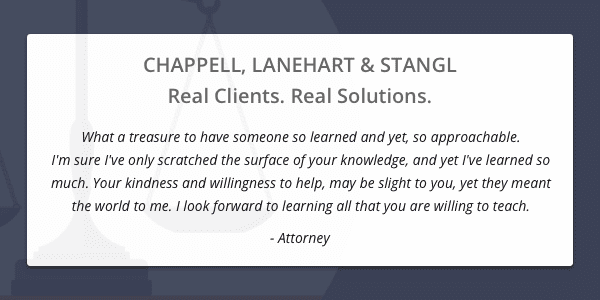 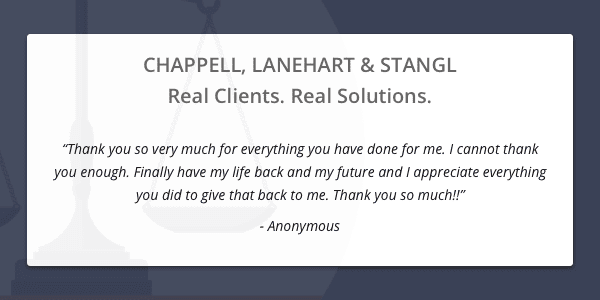 Chuck Lanehart recently earned praise from his 57-year-old client who had been to Colorado to visit her relatives for Christmas. She purchased THC edibles and drove home to the Texas Hill Country. Going through a small county on the South Plains, she was stopped for a traffic violation. The officer said he smelled marijuana and searched her car, finding the edibles. There was no marijuana. After my discussions with the prosecutor, the case was eventually dismissed. My client will be entitled to an expunction soon.

I can’t tell you how grateful we are for your assistance. We feel that your knowledge and relationship with the County of Garza was significant to the outcome of my case. I thank god that I was able to find you and I’m so grateful that you represented me. I’ve had many sleepless and tormented nights thinking about the potential outcome without legal representation. I feel like the weight of this case has been lifted and I can go on with my life.

Chuck Lanehart’s defense led to hung jury, mistrial and ultimately a case dismissal for a Lubbock pastor accused of indecency with a child.

Lanehart’s defense called into question the plaintiff’s credibility through character witness statements. “This is the kind of case where you have to judge a man’s character,” Lanehart said. “The just thing in this case is to find an innocent man innocent because that is the truth.”

Fred Stangl arranged a plea deal for his client, which avoided charges of murder, aggravated sexual assault, aggravated kidnapping and other charges.

Billy Jack Limbaugh was arrested and charged for the 2008 murder of Monica Adams. As part of the deal in May of 2017, Limbaugh was charged for aggravated assault with a sentence of eight years.

“Just because someone gets charged with an offense does not mean they are guilty, and the evidence particularly in the Monica Adams case was extremely weak,” said Fred Stangl, Limbaugh’s defense attorney.

Chuck Lanehart’s client was accused of molesting a child, while running a Lubbock daycare center. A strong defense was mounted, attacking the credibility of the mother of the complainant. Lanehart, argued the abuse claims were due to money conflicts between the mother and the daycare center.

In 2002, the case was declared a mistrial from a hung jury. In 2003, the defense entered into a plea agreement with prosecution and avoided a conviction. Instead of a criminal record or registration as a sex offender, the defendant received a five-year probation period. Separate charges of indecency with a child and injury of a child from two other accusers were further dropped.

Lanehart successfully filed a motion of dismissal for a former corporal in the Lubbock County Jail. A judge agreed to dismiss felony charges of evidence tampering for the defendant. Chuck Lanehart, said his client was a “scapegoat” for the waste of taxpayers’ money paid to Johnson “for a wrong that was never committed.”

Duffy was suspended from Tech for two semesters starting in December of 2016. By August 23, 2017, Duffey’s suspension was ended and the defendant was eligible to rejoin the football team and begin fall classes.

A violation of Title IX sexual assault is typically a second-degree felony with a sentence of two to twenty years in state prison and/or fine of up to $10,000.

Chuck Lanehart, in collaboration with Guy Womack of Houston, secured a pre-trial diversion program for three former Texas Tech football players. The defendants were accused of a second-degree felony count of burglary of a habitation by a grand jury. The alleged incident occurred over winter break in 2015 and carries a maximum sentence of two-twenty years in state prison.

Instead, Lanehart’s client, Castaneda received 24 hours of community service and participation in a drug offender/theft intervention program. The defendant avoided court and could continue playing football and enrollment at a university.